Aldo Famà - The Dynamism of the Line

Dear visitor, unfortunately only this page has been translated into English. Should you need further information about the artist, please feel free to contact us at Questo indirizzo email è protetto dagli spambots. È necessario abilitare JavaScript per vederlo. 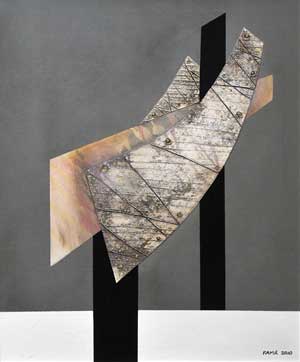 Famà’s abstract language, for which we’ve known him up to present day, is the result of a slow and progressive achievement, within an accurate, linear and coherent pathway. Having started from the Post-Impressionism of the middle 1950s, which along with the Post-Cubism characterised the painters’ panorama of those years also in the Triestine territory, he has come to face himself with a few of them who are ranked among the biggest artists of his territory, such as, for instance, Luigi Spacal and Dino Predonzani, by eventually achieving a code all of his own, quite original and definitely recognisable.

It’s the art of graphics that leads him to experiment with some different places, as alternatives to Figuration, focused on the expressivity of Sign and Matter. It’s the comparison with Spacal that leads him to ponder upon the idea of Composite Structure and of an Abstract Art capable of maintaining, at the same time, deep roots in what is Real. His moving away from Figurative Painting towards Abstract Art painting takes actually place within a Cézanne’s perspective, that is, towards a way aiming at grasping the quintessence of things, as well as of feelings. Therefore it’s not an abstraction finalised to itself though capable of getting rid of what is superfluous in the representation of things and in the transcription of emotions, of keeping intact the link with Reality, even if it’s a Transfigured Reality, simplified and, to a certain extent, purified.

The use of a real pictorial substance, thick of matter and expressivity, connected with the Karst landscape and with a concept of harsh and not always easy Beauty, also reminds of Spacal’ s painting. On the contrary, the flat, intense coloured fields embracing the cold nuances of the grey and light-blue colours to get to the lit up and lively red colours of the background, looking like theatre backgrounds, remind us of Predonzani’s art. In Famà’s painting such backgrounds began to come up to the surface towards the end of the 1970s so much as to make themselves paramount at the outset of the 1980s. But what can connect Famà with Predonzani is also a suspended, magical, surreal and, in certain cases, restless dimension deriving indeed from such chromatic choice-selections, apart from some dynamic drives characterised by strongly poetical accents. Thus, from the works of art where the vision is summed up as fragments, through signs, matter and colour melting and confounding among themselves, he comes to compositions where the chromatic and matter sections detach themselves and stand out so as to create a clear dialectic relationship among them.

The juxtaposition of elements is directed like in a concert in such a way as to create a dynamic comparison among them, by running after some unstable balances and giving origin to unexpected presences and sudden rushes. In the works of art of his last years, which are the protagonists of this exhibition and this catalogue, you can notice then a further evolution of Famà’s pictorial language. A background usually characterised by two flat, chromatic and even tints is counterbalanced by an overlapping of coloured or matter shapes where the Line plays a key role: it is actually the Line that gives movement to the work of art and indeed by means of its dynamism takes on a narrative value. The two parts of the background are rarely divided by a line that might correspond to the horizon line; most of the times the two parts are out of tune as if almost to suggest a front and a rear side, a before and after, an above and below side.

In this way, Space and Time are always present dimensions in Famà’s abstract painting where the connection with what is Real is underlined by both the title and the constant presence of the matter sections. The latter, on a conceptual level if not indeed on a formal one, might remind us of the papiers collés by Picasso and Braque of Synthetic Cubism: bits of paper (newspapers, wallpapers) glued to the canvass to give the idea of Materiality, to make the persisting bond with Reality apparent. And, to tell the truth, paper and cardboard have also been the territory for the artist’s experiments, in a series of artworks where one can find the same geometries of paintings again, though with a new, poor, concrete, even more reduced to what is an essential, language, as it also apparent from most of their titles: Traces of Time (1996), as if almost to underline the limited, minimal author’s intervention.

Going back to painting, Fama’s matter sections alternating themselves to brushes of flat and homogeneous colour, look as if they were nailed or fixed by nuts so as to give a feeling of unavoidability, of inevitable facing with stronger force. A comparison which is therefore played on the basis of colours, shapes, backgrounds, according to a rhythm suggested by the Line, to tell the alternating of sensations and emotions, lived or imagined feelings, existing spaces or inner places. Different worlds and diverse atmospheres come up to the surface;: from landscapes unveiling the memory of the harsh appeal of the Karst plateau, to the Mediterranean ones which possess the warmth and blinding light of the sun; from spring airs leaving place to autumnal evenings, to love songs giving way to deserted ponderings: lines and colours capable of creating sonorities, architectures, silent melodies.

They are memories, thoughts, slightly premonitory or explicitly paradoxical dreams as one can infer from a few titles – Radiography of Feelings (2011), Feeling of Vertical (2010), Breath of Infinity (2007)- ;these are thoughts, memories or dreams blown by the wind and tied by wires that remind us of those for kites; sometimes they are left free to wander into space as if into the mind; in other instances, they are necessarily supported by some black bands which seem to be able to evocate Dali’s crutches. This is what happens for example in the works of art entitled The Wind of Souvenirs (2010), Memory of Shapes (2008), Memories of Summer (2011) and The Melody of Silence (2009). What strikes and fascinates us most in Famà’s pictorial works of art is the co-presence of a geometrical stiffness and a lyrical intonation.

The interlocking overlap or the putting side by side and one after another of the various elements paste well with always different ways, times and pauses, such as musical scores for different variations, both rhythmically and architecturally. And where the Structure stands at the root of thought, the Line stands at the basis of melody and poetry: all of which in a simple and complex ensemble just like, to a certain extent, Life itself can be.